In the 1990s Italian architect and designer Ettore Sottsass (1917-2007), one of the greatest and most influential of the 20th century, encountered the ancient Japanese lacquer art urushi kogei.
Several years of intellectual exchange and design in close collaboration with leading Japanese masters of this highly demanding technique, he designed vessels and objects that embody western (post-)Modernism, Far Eastern elements, Italian esprit and Japanese sophistication in equal measure.
This exciting course of development took Sottsass and his Japanese partner Marutomi from industrial design to unique handcrafted items, from mass-produced products in the characteristic red and black Urushi style, to small series with natural urushi lacquer, to sculpture-like one-offs, the result of hundreds of individual steps applying layer upon layer of urushi to wood.

The exhibition also showcases examples of urushi works by other western designers such as Dieter Rams and Fritz Frenkler. This exchange between East and West in their approach to design and the conceptual inspiration demonstrated in the resulting pieces – illustrated particularly well by Ettore Sottsass’ late urushi objects never before exhibited in a museum – represents an exploration of the roots of design and cultural transfer at its best.

“Japanese influences shaped Modern European artistic output, from the works of van Gogh to Christopher Dresser’s designs and from E.W. Godwin’s furniture to the architecture of Frank Lloyd Wright. Yet the influences also ran in the other direction, from West to East, as shown by the reception of the German Werkbund or the Bauhaus.

Whereas each generation of Western ceramic artists rediscovered Japan for itself, in design a largely globalized language has developed.
As such, Japan’s influence on one of the major designer personalities of the 20th century is all the more revealing. Ettore Sottsass showed great curiosity throughout his life, drawing inspiration also from India, China and South America. In the 1990s he discovered the old Japanese urushi kogei lacquer art. Over years of intense study and collaboration with leading urushi masters, he created vessels and objects that appear to ideally embody ‘East meets West’. Whereas the works of the two German designers following the ‘urushi path’, namely Dieter Rams and Fritz Frenkler, are decidedly minimalist in nature, the works of Italian architect Sottsass also reference other aspects of Japanese art, namely tectonic force, opulence and magic.” 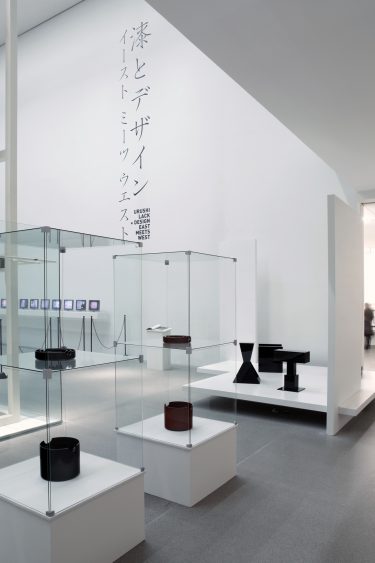