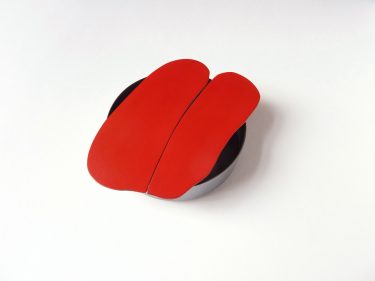 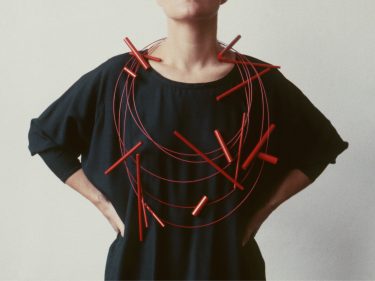 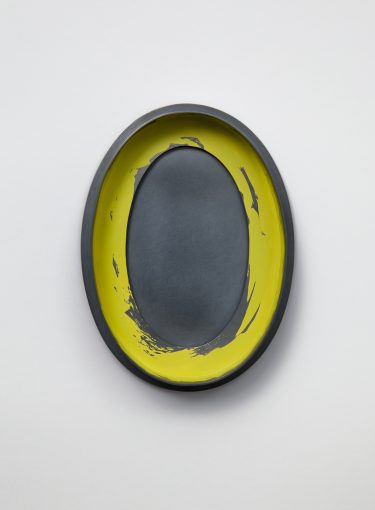 She uses silver rather than gold. She develops her formal vocabulary from the classical canon of basic shapes rather than drawing on the amorphous games of nature. She surrounds discs with frames as though to protect them, as though some of their invisible content might fall out when they are worn as a brooch. Vessels with perforated shells offer a view into their cores. Her work does not exude excitement or loudness, its archaic proportions convey calm and strength. Not to be confused with coldness and distance. At times, she does away with the characteristic interplay between the silver and the ambient light by brushing it to create a matt surface, adding delicately drawn hatching, oxidizing or whiten it varnishing it with a dynamic brush stroke. Quietly and as a matter of course she strives for absolute perfection in all of her work.

The fast pace of our time comes to a halt when we are looking at her work, as we begin to enter into a communication that is careful, tentative, involves several senses, and that allows us to discover a different level, one of emotional depth: the joyful, radiant, surprising side of the artist, which oozes power but is also fragile … and in the end we are reminded of these qualities in ourselves. As children we would hold seashells up to our ears and the grown-ups would tell us we could hear the rush of the sea: But it wasn’t the sea, what we heard was our innermost being. That’s what Hilbert’s jewelry objects are like. You have to take your time to listen to what’s inside of you, in order to feel all of the fragility but also the irrepressible power they contain. As for so many things, nature has created its own visual synonym: the volcano. On the outside, the volcano symbolizes calm, silence, idleness; its inner processes hidden away – for years, decades, centuries it lies dormant and still. Then it begins to seethe. Cracks form in the earth’s crust. Smoke rises. Culminating in a powerful eruption. The volcano’s true nature shows itself as fiery magma bursts out into the open. Therese Hilbert discovered this fascinating topic in the early 1990s and has since addressed it in ever new and unique works.

Much more could be said and even more written about the works of the Swiss jewelry artist Therese Hilbert, born 1948 in Zürich. She studied under Swiss goldsmith Max Fröhlich at the Zurich Applied Arts School (Kunstgewerbeschule), was awarded the Scholarship Prize of the Swizerland’s Federal Department of Home Affairs (Schweizer Department des Innern) several times early in her career (1972, 1974, 1975) and then relocating to Munich, together with her love. It was here that she continued her studies, at Munich’s Academy of Fine Arts with jewelry artist Hermann Jünger – one of the founders of international studio jewelry along with Max Fröhlich. Therese Hilbert has been living and working in Munich ever since. In 1974, she was awarded the renowned Herbert Hofmann Prize. In 1978, she received her diploma at the Academy, in 1986 she was awarded the City of Munich’s Förderpreis Prize. And in 2001, she was awarded – one almost wants to exclaim: “finally!” – the Bavarian State Prize (Bayerischer Staatspreis). It had been clear for a long time that what she was creating were works of art. Contemporary art works that can be worn. They can be found in the most renowned of museums world-wide, in the choicest galleries for contemporary art, and the most renowned of private collections.

Die Neue Sammlung is delighted to present the first solo exhibition on Therese Hilbert’s art in close collaboration with the artist herself. Hilbert has selected around 250 pieces for the exhibition, beginning with almost unknown early works through to her newest works created in 2021.
Join us in celebrating the life work of an extraordinary artist.

The exhibition will be accompanied by the first comprehensive catalogue of jewelry artist Therese Hilbert’s work. The volume will be issued by arnoldsche Art Publishers, Stuttgart, and will include texts by Heike Endter, Otto Künzli, Ellen Maurer-Zilioli, Pravu Mazumdar, Angelika Nollert, Warwick Freeman and Petra Hölscher.