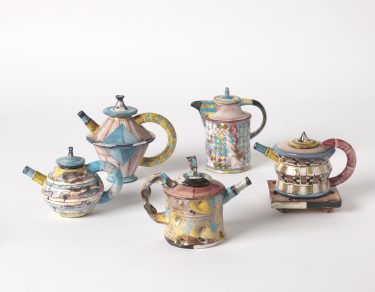 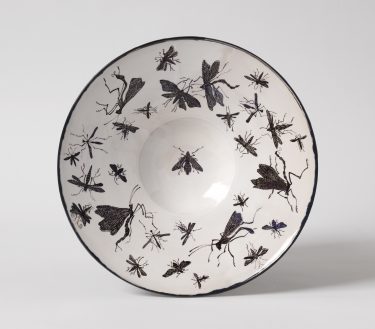 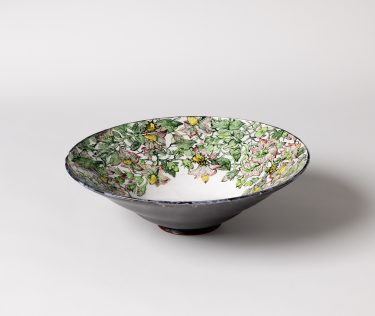 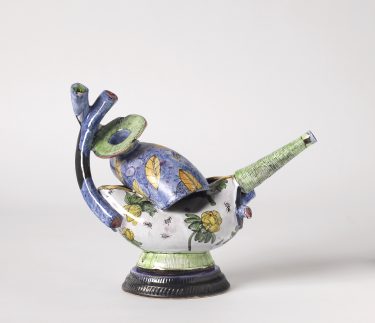 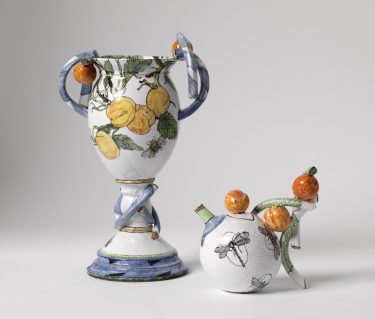 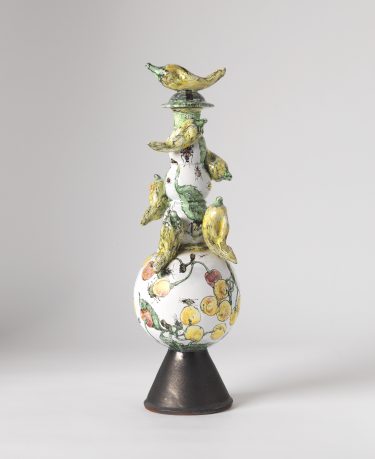 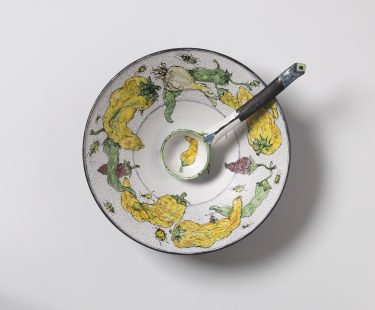 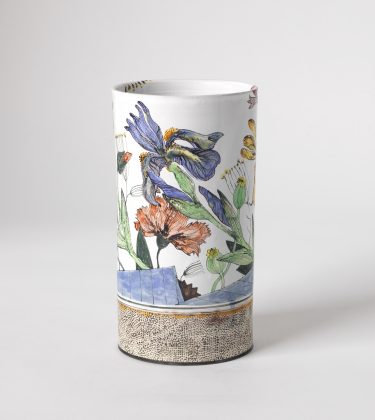 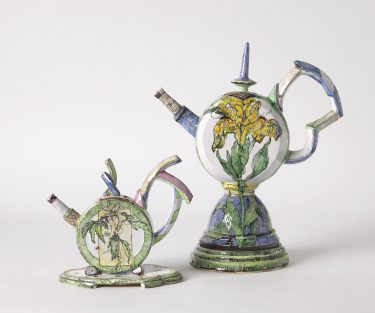 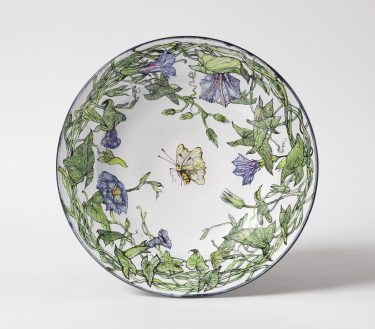 Blossoms, leaves, fruit, vegetables and insects, everything recorded exactly, reproduced impressively and applied in perfection to her individual ceramic vessels and objects. With her faience ceramics painted delicately and in detail, Sonngard Marcks is one of the virtuosos of contemporary German ceramics.
Born in Martin Luther’s native town of Eisleben in the east of Germany, in 1959, after graduating from high school Marcks trained as a potter in Bürgel, Thuringia. She subsequently moved to Halle to study “Artistic Ceramics” at the Burg Giebichenstein school of industrial design (today Halle’s University of Art) with Gertraud Möhwald, Heidi Manthey and Lothar Sell. Marcks graduated in 1984. She remained at the university for a further two years, acquiring an additional qualification from the Ceramics department. She has been working as a freelancer since 1986, initially in Neuwegersleben (Saxony-Anhalt), and as of 1998 in her new workshop in Wolfenbüttel. Her work soon garnered her great recognition as evidenced by the numerous awards that she received in subsequent years – including the INAX Design Prize for Europeans (Japan), the Oldenburg Ceramics Prize, the Diessen Ceramics Prize and the Bavarian State Prize.
Marcks produces pitchers, cups, plates, platters, vases, bowls, boxes, candlesticks and other items. In some of her work, individual shapes almost appear to have taken on lives of their own. This development is particularly noticeable with her highly diverse pitchers and ewers which she places on bases like monuments. However, these bases, which she also uses for other ceramics, not only elevate the relevant hollowware, they simultaneously offer additional painting space, thus providing them with their own independent existences, existences which go beyond their purely utilitarian function. Something striking about Marcks’ pitchers is their different handles, often shaped like branches, leafy twigs, fruits or vegetables. Her pommels, handles and feet also manifest the brimming imagination, not limited exclusively to painting, in evidence in this versatile ceramicist.
However, it is in her painting, even more clearly than in her sculptures, that the changes she artist has been through are best revealed. Marcks has often used pictorial elements that are intricate, abstract and sometimes even geometric, developing an imaginative system of symbols which she has gradually expanded. In the 1990s her themes gradually began to undergo a shift away from geometric patterns with an abstract quality and towards the figurative, towards shapes based on nature. From then on, individual plants and insects started to appear in her ceramics with increasing frequency, and she has worked with great intensity on creating a new pictorial world of her own.
Even though drawing has always been her passion, her dexterity with brushes, pens and pencils has since scaled new heights. She traces out the plants, blossoms, fruits and insects over and over again. And it is only when she is satisfied with them, or, to put it another way, when, after investing a great deal of time in an item, that she feels confident, when she has understood and appropriated everything about it, both as a whole and in detail, that she can include a new motif in her pictorial repertoire and her ceramics.
Admittedly, drawing itself was essential and fundamental to Marcks’ work from the outset but it is becoming increasingly important and gradually developing into an artistic medium within her oeuvre in its own right – something to which the numerous sketchbooks and individual drawings attest.
Sonngard Marcks is a fixed star in the contemporary ceramics firmament. However, it is not only her virtuoso drawing abilities that are key to her success as a ceramicist but also the sheer sense of sculpture to them, something that combines with her painting skills to create hollowware and objects that are unique, thus creating a magic world of flowers, leaves, fruits and insects whose details often only become apparent on closer inspection. Sonngard Marcks’ work is a joy to behold – and I would go further: It opens our eyes to beauty, to the “brilliance of truth” and thus to what lies behind it – because beauty too can open up new ways of thinking.

The accompanying catalogue is available for Euro 15,00.