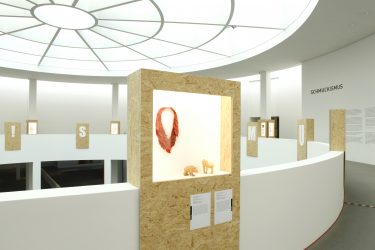 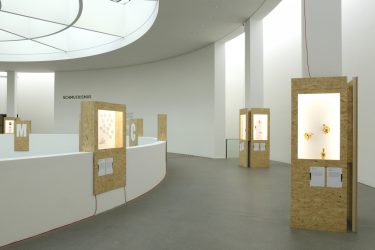 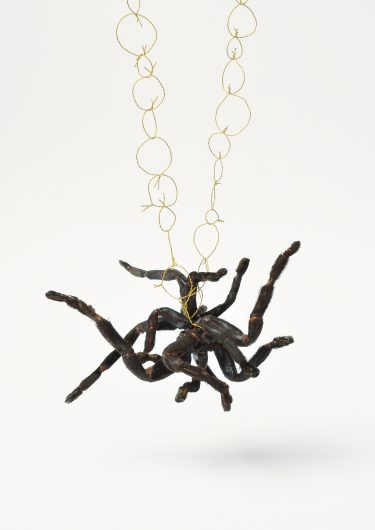 In 2019, Die Neue Sammlung is inviting Karen Pontoppidan (born 1968), the renowned Danish jewelry artist and Professor of the Jewelry and Hollowware Class at Akademie der Bildenden Künste München, to curate the annual jewelry exhibition at Pinakothek der Moderne.
The exhibition titled SCHMUCKISMUS showcases works by 30 international jewelry artists under the Pinakothek’s glass dome. Included are works from recent years, as well as one piece by each artist designed and produced especially for the exhibition. All the objects on show share and stand out for their engagement with and exploration of social phenomena. Pontoppidan’s concept was born out of the deep conviction that the rigid political and religious “–isms” of our day require careful review.

“The origins of jewelry go hand in hand with the onset of the earliest civilizations. Anthropologists often describe the origins of jewelry as a marker for belonging to a specific group as against other possible communities, and at the same time as something that identifies an individual position within membership of a particular social group. In both cases, the art of adorning oneself can be described as political as it constitutes an expression of fundamental social structures.
Nowadays jewelry is often described as an individual expression of personality. Jewelry is thus ascribed to the private sphere, instead of being read as an important cultural badge. Yet at the very latest with the emergence of queer and gender theories it has become clear that the way individuals present themselves can no longer be read as an individual expression of personality. Scientists point out that in our everyday lives normative structures of thinking regulate the spectrum within which humans adorn themselves. The right to a “queer” look is then not something individual but a political issue and at least partially a hard-won one. It is precisely this discrepancy between jewelry often being perceived as private and yet its function as a social symbol that makes jewelry a wonderful form of expression for formulating critical thought. Throughout its history, jewelry has time and again served to describe social structures. This fact has conversely given rise to work that emphasizes jewelry’s potential for critical discourse.
The last 50 years in the history of studio jewelry has seen many works that formulate critical approaches, for example to specific value systems. Most of these objects are rooted in a discourse that is part of a critical study of jewelry traditions. In recent years, a further approach can be discerned in jewelry. In the contemporary works of a young generation of artists, jewelry has for the most part extricated itself from the clutches of self-reflection. Instead, it is used directly as an instrument for social discourse. Topics such as ecology, consumer society or feminism are addressed directly through the medium of jewelry. More restrained jewelry practices also exist, which nevertheless focus on topics that are no less relevant – such as questions of identity formation or the status quo of being human in the 21st century.
The latest approach that can be observed in expression through jewelry consists often of relying on the cultural significance of the materials used as the paramount quotation within the pieces. Another path lies in questioning how handcrafts are seen as well as their social value, or in challenging the suggestion that each piece must possess so-called good form.” Karen Pontoppidan

A catalogue spanning approximately 160 pages will be issued by Arnoldsche Art Publishers on the occasion of the exhibition and will include contributions by Hanne Loreck, Angelika Nollert, and Karen Pontoppidan, with a book design by Yvonne Quirmbach. Our thanks goes to the participating jewelry artists.