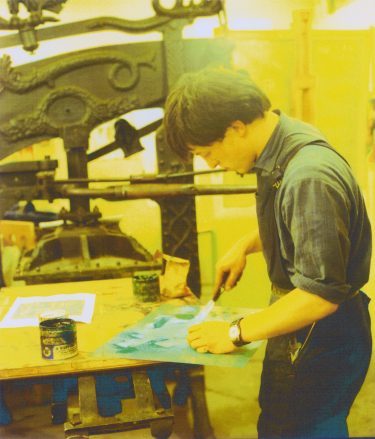 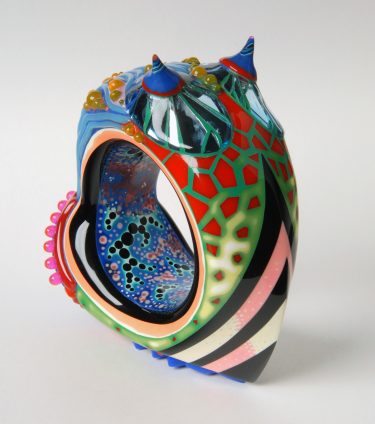 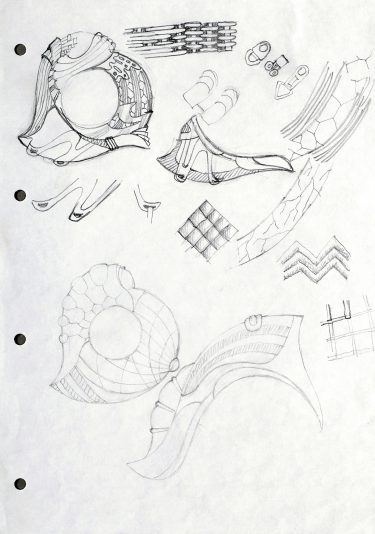 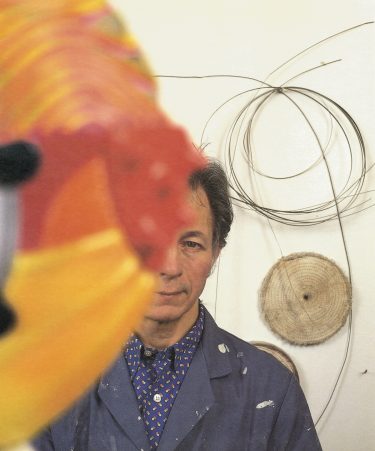 In 2004, the Danner Rotunda in the Pinakothek der Moderne in Munich was opened to the public as a showcase for studio jewelry. Ever since, the major jewelry exhibitions and opening nights held at Die Neue Sammlung – The Design Museum in the Pinakothek der Moderne to coincide with the International Crafts Fair, have been attracting both artists and collectors, jewelry aficionados and museum colleagues. Peter Chang was always there. Born in 1944, he died in October 2017 in Glasgow at the age of 72.

Peter Chang usually stood at the edge of the Rotunda, the main room in the Pinakothek der Moderne, right where the stairs lead down to the design collection and the jewelry space. Always calm and quiet, observing his surroundings, invariably clad in his brown leather jacket: the exact opposite of his vividly, lavishly colorful jewelry. When you wanted to talk to him, the son of a Chinese father and a British mother, he answered in a low, almost inaudible voice – but his eyes began to shine. His wife Barbara, a textile artist, was always on his side. Her orange-red hair stood out like a landmark among the exhibition’s crowd of inaugural guests. Quite often, Peter Chang could only be spotted thanks to her hair’s radiant color. In March 2016, he was lauded as a “Classic of Modernism“ at the International Crafts Fair’s special “Jewelry“ show. We saw him for a last time at the opening of Thomas Gentille’s exhibition.

For a long time, the jewelry city of Munich had lavished much less attention on him than on many of his colleagues. The list of accolades Peter Chang received – including the Jerwood Award in 1995 and the Creative Scotland Award in 2000 – did not include a Bavarian State Prize or a Herbert Hofmann Award for a long time. At least he received the latter in 2003. The Neon Gallery in Brussels, founded in 1976 by Bernard François, was the first on the European continent to publicly showcase his concept of jewelry in 1987, after it had already exhibited works created by Onno Boekhout, Marion Herbst, Vered Kaminski and Beppe Kessler. Afterwards, his creations were also displayed at Helen W. Drutt English’s gallery in America and Olga Zobel’s gallery in Munich.

Peter Chang had neither trained as a goldsmith nor completed a university course in jewelry. Instead, he had studied sculpture in Liverpool, and had also earned a degree in graphic design at the Liverpool College of Art. Moreover, he had been gifted with boundless imagination. The city of the Beatles and the “Yellow Submarine“ in northwestern England, whose economy suffered severely in the 1970s and 1980s, was the center of his life and source of inspiration until 1987. In 1971, Peter Chang set up his fist workshop there, making a living working for graphic design agencies and creating models fot the TV industry. This necessitated a switch in dimensions from large-format sculptures to small-size models. While crafting the latter, Chang discovered the fascination of repurposing products thrown away by our affluent society, starting from disposable razors and thrown-away tooth-brushes to discarded plastic cans and colorful, outmoded coatrack hooks, empfty felt-tip pen shells and rulers, no longer needed – all of them made of plastic. In the 1960s and 1970s, plastic was the material that seemed to make everything possible for a society longing for fresh colors and shapes and a new identity in the Vietnam and Cold War era.

For Chang, plastic was a material that can be shaped and liquefied by heating it, that can be sanded and polished like lacquer: “I wanted something that reflects the era we’re living in, and I liked the idea of working with a disposable material that gave me the liberty and luxury of taking risks and making mistakes. And i’ve always liked its properties that we can feel when we touch it. Natural materials like wood impose their own character on us. Plastic, by contrast, is anonymous.“

In addition to wall objects and table accessories, Peter Chang also created small- and miniature-size sculptures. In the late 1970s, he crafted them for the first time in the shape of pendant earrings – a gift for Barbara – and discovered the medium of jewelry for himself. And we might ask ourselves whether it wasn’t Barbara, as the strong woman behind a successful man, who provided the decisive impetus for his starting to make jewelry. Soon he created the artifacts that we all admire, that repeatedly render us speechless with their innovative formal idiom characterized by multi-layered reliefs and highly imaginative protrusions, mosaic-like surfaces and countless lacquered layers, that teach us to view plastic with respect, even to love it , especially in view of their glossy colorful splendor that defies any attempt at comparison. Each of the academically trained graphic designer’s creations represents a sophisticated statement. So it’s unsurprising that it took him several hundred hours to craft one of his tipically opulent bracelets. Each of Peter Chang’s pieces not only exudes a positive energy, but its radiant cheerfulness also changes the wearer’s aura. “I want to incorporate a bit of fun, to add a dash of zest. People take everything too seriously.“

Reveling in the material, consummate expertise in terms of options for working it and a keen sense for colors were the prerequisites for creating these exquisite pieces. They don’t give us an idea of the risk involved in crafting them, i.e. from the hazardous chemicals included in the dust generated in the process. Each of his works is a one-of-a-kind piece that makes us forget that it is made of plastic, nowadays a much-criticized material, because it radiates an aura like a hitherto unknown gem.

With his creations, Peter Chang blazed new trails for studio jewelry.
We will miss him and his unique works of art that enriched the jewelry world in their own distinctive manner.

The article was first published in Art Aurea