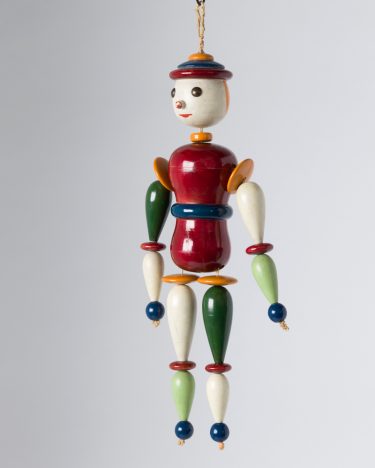 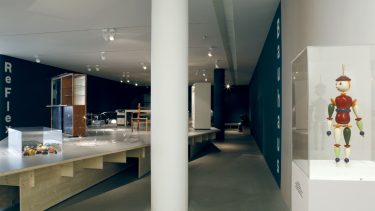 Painter, graphic artist, sculptor, stage and wall designer Oskar Schlemmer played an incredibly important role both in early Modernism and as a teacher of the principles and theory of design. After studying under Adolf Hölzel at Stuttgart’s Academy of Fine Arts, he was appointed to the “State Bauhaus” in Weimar by Walter Gropius as early as 1920. He began teaching there in 1921 as Head of the Murals Workshop and went on to become “Form Master” in the Workshop for Wood and Stone Sculpture. From 1923 until his departure in 1929, he was in charge of the Bauhaus Stagecraft Workshop.

Something essential to understanding his jointed doll, which he originally designed as a birthday present for one of his daughters, is his practical and theoretical approach to stage costume design. A good example of his aesthetics of the geometrized physical theater on the stage can be illustrated by the “Triadisches Ballett” first performed in Stuttgart on September 30, 1922.

Schlemmer’s prime concern was to transform the human body into an abstract artistic body through costume. His text on the subject of “Mensch und Kunstfigur” (Man and Figure of Art) was published in 1925 in volume 4 of the Bauhaus book series, “Die Bühne im Bauhaus” (The Stage in Bauhaus). In one of the premises he stated for costume design he writes that for him the “functional law of the human body in relation to space” is accompanied by a standardization in type of body shapes”. Schlemmer quotes “the egg shape of the head, the vase shape of the body, the cudgel shape of the arms and legs, the spherical shape of the joints” which, when all is said and done, end up as the jointed doll.

The above-mentioned points amount quite exactly to a description of this doll. Just as the extreme colorfulness may possibly have been intended as a tribute to a child’s toy, so we might also understand Schlemmer’s basic concern to be to fathom the relationship between the human shape and space – here, in a small format.

These jointed dolls, of which only a very few have survived, were executed in a few variations by Josef Hartwig (1880–1956) who worked as Master of Works in the Bauhaus Wood and Stone Sculpture Workshop and who designed the famous Bauhaus Chess Set in 1923.

The doll can be seen until February 2, 2020 in context of our exhibition “Reflex Bauhaus. 40 objects – 5 conversations”.