A racing car is more attractive than Nike of Samothrace – claimed 1909 Italian poet Marinetti in his Manifesto of Futurism, rating the beauty of dynamic motion, the intoxication of pure speed more highly than a famous statue from classical antiquity. The automobile has remained an object of desire since then, and shaped our civilization like no other product has. Shortly after the presentation of the Citroen DS 19 with its groundbreaking design in 1955, French philosopher Roland Barthes pointed out that today the automobile was the exact equivalent of the great Gothic cathedrals. In other words, it is the sum of all the creative energies of our time.

So following Design Vision, the museum is devoting an inter-temporal setting to Vehicle Design. The room opens up to the outside on two floors; standing on high shelf structures the exhibited objects make a deliberate visual reference to the Alte Pinakothek and the art of the past.
When Gottlieb Daimler and Carl Benz built the first motor vehicles in 1885/86 their design was still inspired by coaches and horse-drawn carts. This would not alter until the 1920s when automobile design could be said to have started. For one thing, a self-supporting body allowed a free design of the outer form. The decisive technical, constructional and formal innovations came from engineers and designers. In the late 1920s, former director of the Bauhaus, architect Walter Gropius, who worked for Frankfurt-based automobile firm Adler, expressed the premises for this new design task as follows: “an automobile’s beauty is not determined by embellishment … but can be measured in the harmony of the whole organism, the logic of its functioning, the inner truthfulness… In other words, in aesthetic terms the outer appearance needs to ‘function’ just as much as the technical device.” However, it was not only functionality, but above all dynamism and speed that defined the next developments.

Typical for forward-looking automobiles was an aerodynamic body shape. Often designers drew on insights gained from aviation. In the 1930s we find the most imposing symbol for this intoxication with speed in streamlined shapes. Viennese designer Paul Jaray numbers amongst the pioneers of the streamlined form. Numerous aerodynamically styled vehicles are based on his patents: the so-called “Autobahn Adler” or the “Steyr Baby”, but also what is arguably the most impressive automobile in this context: the “Tatra 87” – and even the “Beetle” with its more moderate interpretation of these design principles. Simultaneously, the streamlined design triggered a fundamental change in automobile design: the engine and chassis no longer served as the starting point for the design, but the body design, to which everything else was subordinated. After World War II, it was the Citroen DS 19, designed by Italian sculptor Flaminio Bertoni, or the NSU Ro 80 by Claus Luthe presented a few years later – the first mass-produced cars with Wankel engine and precursors of the wedge shape, which heralded the new era in automobile design. Accordingly, the design of automobiles – these icons of the industrial age – fluctuated between the two extremes of functionality and symbolic design. The “hidden logic”, i.e., styling by engineers and technical designers on the one hand, and design as sculpture, artistic manifestation or the expression of intense emotions formed the two poles. 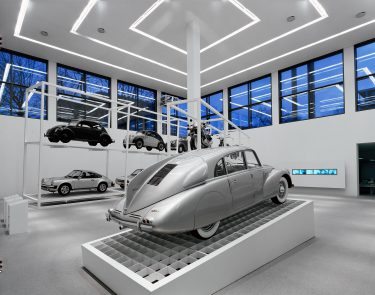