17 years lie between Pipilotti Rist‘s „Himalaya Goldsteins Stube“, currently on view on the first floor of Pinakothek der Moderne, and Werner Aisslinger’s temporary „House of Wonders“ in the Paternoster Hall. Both installations draw their atmosphere out of the friction between digital and analogue reality, reflected for instance in the creatures populating the two different dwellings. Which idea of technology is linked to Pipilotti’s spirits from 1999 and Aisslinger’s domesticated little helpers from 2016? Has it changed? 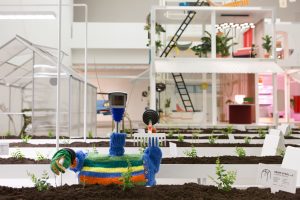