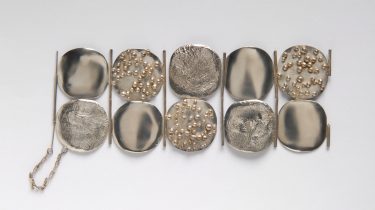 In the 1960s and 1970s she was considered one of the leading jewelry artists in Great Britain, but she was born in 1936 in Germany and grew up in Schwarzenbach on the River Saale at the foot of the Fichtel Mountains. In 1957 Helga Zahn left her hometown for the pulsating life in London, experienced both the “Swinging Sixties” and the emergence of the Pop Art movement. She had a second home in New York and often traveled to Paris. She soon became one of the key figures in the “studio jewelry movement”, which began after World War II and was still in its infancy, which no longer saw jewelry as jeweler jewelry, but defined it as an innovative and independent art movement. Interestingly, Helga Zahn was self taught, and not a trained goldsmith.

Helga Zahn worked in silver, an inexpensive material not regarded highly by the establishment, which she cut before working the surface. It was not only unusual and unconventional that she should use unpolished pebbles, but also that she mounted them using simple adhesive bonds. Later she would add the classic clasp and cabochon mountings. Her formal language is characterized by the clarity of simple geometric shapes – rectangles and circles, by the lightness and simplicity of her connecting elements – usually simple small rings – and by a palette that was initially limited to just a few colors, namely silver, black and brown. She created extraordinary one-off jewelry items, sometimes using found objects. At the same time, in the mid-1960s she revolutionized the globally emerging studio jewelry movement with an innovative system concept that envisaged the use of small cut panels. Mounting them on top of each other creates the impression of movement and transforms them into kinetic art. Delicate, accentuated lines and an expanded color palette in these works reflect the graphic work of Helga Zahn. Photographs of her pieces by the later famous fashion and product photographers Sidney Pizan and Tessa Grimshaw-Traeger also set totally new standards. Jewelry artist Helga Zahn quickly became “an important liberating force in Britain…” as Ralph Turner, co-founder of the jewelry gallery “Electrum” and later Head of Exhibitions at the Crafts Council, London, put it.
Her works were presented in London’s leading galleries early on – in 1965 at the “Ewan Phillips Gallery” and in “Pace” (1969) and later “Electrum” (1971) by Barbara Cartlidge and Ralph Turner. In 1966 Helga Zahn showed her work in Munich at the jewelry exhibition of the Internationale Handwerksmesse (International Craft Fair) and received the Bavarian State Award.

To mark her 80th birthday the town of Schwarzenbach an der Saale, in cooperation with Die Neue Sammlung and on the initiative of the Dr. Hans Viessmann Foundation, is honoring this extraordinary and pioneering jewelry artist. The exhibition on the lifework of the artist, who died in 1985 at the age of just 49, features around 80 jewelry objects and a selection of her silkscreen prints.

The exhibition is accompanied by a catalog of 104 pages published by Arnoldsche Art Publishers, Stuttgart.