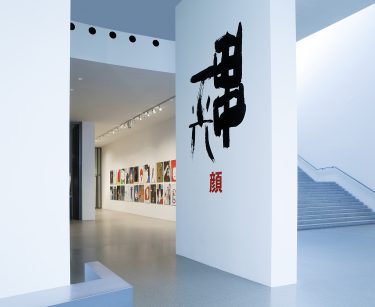 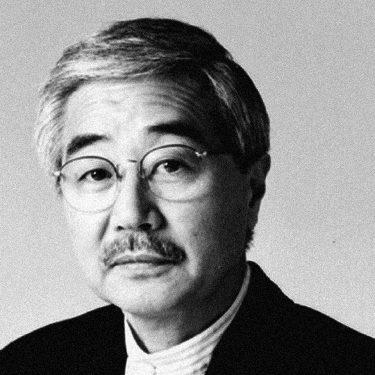 The word face with its innumerable meanings also refers in printing to the type as in typeface and thus here references printing per se and in particular the fonts.

A large, Japanese typeface greets visitors to Pinakothek der Moderne until mid-July 2018 … and illegibly for most sets – a strong graphic message that evidently has something to do with the wall behind it, on which two rows of posters are to be seen, in bright colors and likewise in a largely incomprehensible script.

For the exhibition Ikko Tanaka. Faces. Posters, a presentation from the museum collection at Neue Sammlung, Japanese graphic designer Tetsuya Ohta has created the “headliner”, the typographical theme for the entrance displayed on the pillar in the rotunda.

For this purpose, Ohta used Ikko Tanaka’s hand-written signature blown-up to cover the whole wall, written in black from top to bottom, and from right to left: “Tanaka Ikko”. Beneath it in red, and shaped like a seal on a graphic sheet, stands the character for “face”. Unlike the expressive signature, this character is a typeface. As is customary in Japanese, the person’s name and the term are both reproduced by Chinese Kanji characters.
On the other side of the pillar Munich graphic designer Mirko Borsche created the German-English exhibition title.

As of 1963 Tetsuya Ohta was the first assistant and staff member of Ikko Tanaka working in the latter’s graphic studio in Tokyo, which opened in 1963; in 1975 Ohta opened his own studio. The design of the typography on the pillar and the graphics for the exhibition poster and flyer can all be read as his homage to Ikko Tanaka.

The design and realization of the Japanese wall title was made possible with the kind support of DNP Foundation for Cultural Promotion, Tokyo