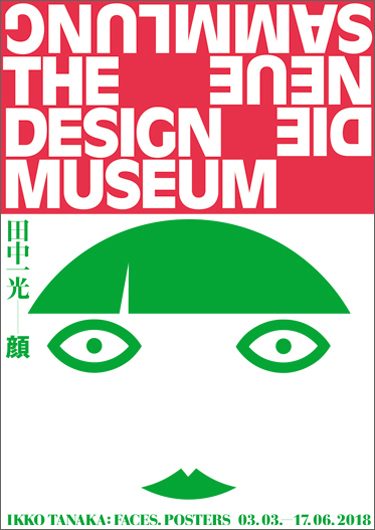 Exhibition poster as an homage by the former “pupil” for his master.

Graphic designer Tetsuya Ohta – born in 1941 on the South Japanese island of Kyushu – worked from 1963 onwards as the first assistant to Ikko Tanaka (1938-2002) and as a staff member in the latter’s newly opened design studio in Tokyo.

Ohta made use of an Ikko Tanaka self-portrait for the poster and the flyer with an identical cover. Tanaka probably drew the highly abstract graphic with the suggestive gaze around 1960.

While Ohta placed the English exhibition title and dates beneath the face in the horizontal strip defining the lower edge of the poster, to the left of the face like a small banner hangs the abbreviated Japanese title in Kanji characters: TANAKA IKKO – FACE.

Tetsuya Ohta
Born in Nobeoka in 1941. Graduated from the Kuwazawa Institute of Design in 1976. After working in the Ikko Tanaka Design Studio, established Tetsuya Ohta Design Studio in Tokyo in 1975. Exhibitions: “CI of Japanese Companies”, 1985 at Matsuya Department Store; “Diagram” at Ginza Graphic Gallery, 1991. Awards he has received include: Ministry of International Trade and Industry Award of the National Cover Design Concours in 1991, ADC Award and Hiromu Hara Award in 1992 among others. He is a member of JAGDA, JTA, International Typography A. Type 1.