A fluorescent marine creature, a burning bush, an atomic cloud, a mass of gleaming blond curls…
This luminaire evokes a wide range of associations. And some of them are confirmed by the luminaire’s name: The Italian word “Cespuglio” means bush, as well as mane. At the same time, “di Gino” arguably refers to the Italian painter and sculptor Gino Marotta. The artist shared his enthusiasm for neon-colored Plexiglas and fashioned many of his sculptures from this material. Similarly, Lucini’s luminaire was in part sold as a sculpture, and not a table lamp.

To make yourself a “Cespuglio” you take a round base of polished, white metal as a mount for the illuminant and arrange 16 neon-green acrylic glass elements in a circle around it. The material used for the luminaire – acrylic glass – has fascinated designers since the 1930s thanks to its visual lightness and the way its coloring alters with the light. Lucini also exploited a further characteristic of Plexiglas: When light falls on it, its edges glow. The light is thus directed outwards. The result is that fascinating reflections are created on the ragged edges of the Plexiglas and the three-dimensional effect can completely unfold. The chairs by Cesare Maria Casati & C. Emanuele Ponzio (1968/69) for the nightclub Il Grifoncino function in a similar manner: They were lit from below with black light and the transparent Plexiglas backrests began to flash in time with the music.

The start of the luminaire’s production coincided with the “Golden Age” of Italian design (1968-1973) when products became more provocative and experimental. Design language also underwent a fundamental change at Guzzini. No longer was the aim to visualize the material’s special features or conceal the material’s surface beneath decorations. There was a great deal of experimentation with colors and their impact, and the mechanical properties of plastic were increasingly explored.

Originally, Ennio Lucini was employed by Fratelli Guzzini to handle product marketing and design the firm’s corporate identity. He had already made a name for himself through his work for the famous design magazine Domus. Yet with his table lamp he was also able to demonstrate his talent as a product designer. 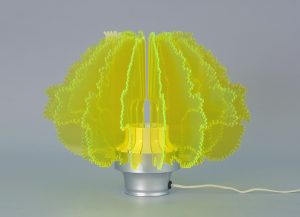