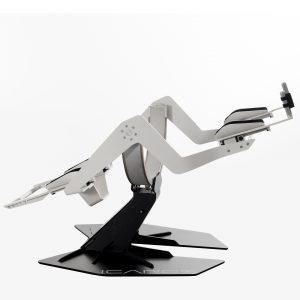 Physical reality – which in this case means real, strenuous exercise – is intertwined with a virtual reality, for example the simulation of free flight through a virtual mountain landscape, in such a way that it makes an intensive and holistic form of experience possible.

Strong physical interaction is particularly effective at heightening the degree of immersion in this artificial, different reality. This effect of immersion is also the crucial new concept underlying this fitness innovation. The user’s awareness – in this case as a pilot of sorts – of being subjected to illusory stimuli can take a backseat to such an extent that the virtual environment comes to be regarded as real: The user feels like he or she really is flying.

But how exactly does that work?
Built like an oversize gyroscope, the device allows users to move along two rotational axes. This means they need to keep their body in balance in a so-called plank position. Resting on their forearms and lower legs, users need to maintain body tension the entire time, with movement achieved through the purposeful shifting of weight. Just ten minutes of this workout can be extremely exhausting.
A controller with a range of sensors mounted on the handlebar records all movements the user makes on the device and transfers them into the virtual depiction of an HMD (head-mounted display) via wireless Bluetooth technology. This headset holds a smartphone with the corresponding app activated on its display. The device itself thus works in a purely mechanical way, like an exoskeleton, and is moved only through the pilot shifting their weight – turning the body itself into a control unit.

ICAROS Pro is a new addition to our collection – first and foremost because of its trend-setting potential (not only) in the design of fitness equipment in the third millennium.