Take a sphere, a beach chair and wide-ribbed cord, combine them with uninhibited enthusiasm for human extraterrestrial expeditions, and hey presto: You have a relaxation capsule ready for garden use.

Designed in the late 1960s by a sculptor and an architect, this garden sofa typifies the Pop design of the day: A round, expansive shape couched in brash colors and made of plastic. This was all possible thanks to hand laminating, a technology that enabled large-sized plastic furniture to be made by hand from high-tensile fiberglass. The fiber material was steeped in polyester resin in negative molds and then combined, a process that required a lot of labor and yet was an optimal way of manufacturing three-dimensionally molded prototypes and small series given the low tooling costs.

At a height of just short of 160 cm and a width of 170 cm, the Sunball provided plenty of space for two adults, while the round side-table mounted on one side was easily large enough to carry bowls of nuts and pretzels. By means of a swivel hinge on the side, the upper ball segment could be lowered over the lower section to ensure the cord world within was protected from the elements.

As with the Ball or Globe chair designed by Eerio Arnio in 1963, the Sunball was again a hybrid of furniture and architecture. It was an armchair in which you could hide and protect yourself from the surroundings. A design vision that reflected an epoch characterized by the arms race, offering protective spaces and series of modular architectural elements.

The Sunball was produced and on offer for only three years, as part of the interior design collection of Rosenthal AG, the Espelkamp-based porcelain makers. At a price of some 4,000 deutschmarks it was almost unaffordable as garden furniture and more expensive than many a bower in its entirety.

Incidentally, the highly popular German TV talk show of the 1970s, “Der grosse Preis”, anchored by Wim Thoelke, relied on the Sunball’s aesthetics and each candidate was sat in precisely such a so-called “Candidate Ball”. 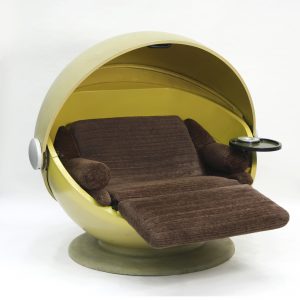 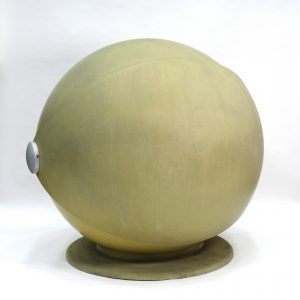