Like the enormous eye of an optical telescope, this reflective sphere also seems to direct our gaze towards the firmament. However, it is not stars or distant galaxies on which this futurist object has set its sights, but the TV viewer. Formal associations are evoked ranging from a high-tech eye to an astronaut’s helmet, which is no coincidence, as in the 1970s product designers around the world were fascinated by space travel.

The futuristically styled black-and-white Japanese TV set “Nivico”, mod. 3240 GM, comes complete with a telescopic antenna and stands on a square base housing the loudspeakers. Orange-colored plastic combined with dark violet tinted acrylic glass are key design characteristics, and are complemented by a practical detail, namely a metal chain for carrying or suspending the TV. At the time this compact, portable design object was extremely popular and consequently a commercial success.

In no time at all the television set emerged as a veritable Space Age fashion accessory. According to an advertising slogan, the innovative Videosphere would even attract attention when not switched on: “Introducing a television that’s more fun than most of the shows you’ll see on it.” Moreover, the model itself also became something of a TV star, appearing from the 1970s onwards as a prop in science-fiction films (e.g., “Matrix”, 1999) or in video art installations (Nam June Paik, “TV Buddha”, 1974).

Available in different colors, the TV can be hung freely in the room or can rest in the hollow of the base and be tilted to suit the viewer’s standing, sitting or reclining position. And as it also runs on batteries, the 35cm-high appliance (it weighs just over 5 kilos) could be taken everywhere like a handbag. It could be stood on the kitchen counter (like you might do with today’s tablet PCs) and provide entertainment while you were cooking – mobility as a pioneering idea. Its light weight and compact size were facilitated by the technical innovations from the 1950s onwards and the introduction of the transistor. Ultimately, the small format is one of the reasons for the popularity of plastic housings in product design at that time. 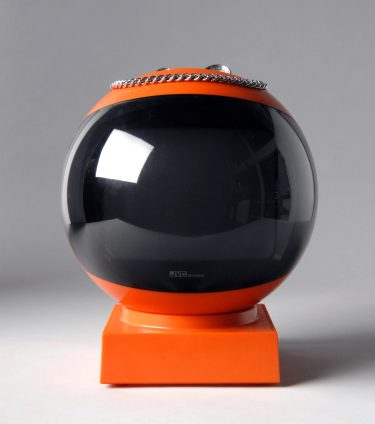 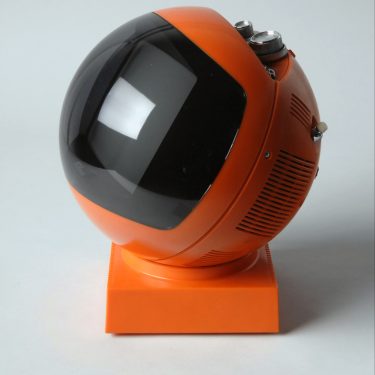