Three rooms complete with design presented at Neues Museum will shed light on the topic of “East and West”. In the wake of the presentations on “DDR / BRD” and “Czech Design” attention moves across the Atlantic to North America.

After World War II, the USA was considered the leading design nation. Design celebrities such as Eero Saarinen or Charles and Ray Eames played a key part in this, and their work stands out both for organic shapes and superior functions. The design of everyday articles was driven by issues of comfort and making daily work easier. The consumption of beverages such as Coca Cola or leisure-time pursuits all now became a matter for the masses and thus more democratic. The numerous vending machines and juke boxes that arose from the late 1940s to the end of the 1950s symbolize this new, colorful feel for life. To this day, the notion of the “American Way of Life” is a synonym for what liberty and prosperity has to offer. With the ambiguous irony of their name, the futuristic and elegant “Over the Top” sunglasses seem to mirror this splendidly.

The display for the presentation “East and West: USA” has been specially designed by Berlin artist Tilo Schulz (born 1972 in Leipzig). Since the early 1990s, Tilo Schulz has worked as an artist, curator, exhibition designers, and author. 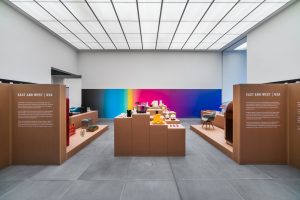 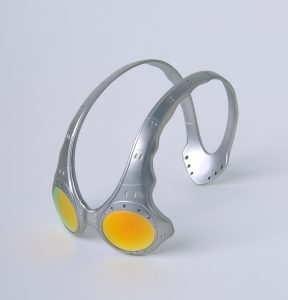