American Donald Judd (1928-1994) is widely considered one of the most important artists of the 20th century world-wide. In the 1960s he came to fame as one of the champions of Minimal, and expanded his creative reach to include the fields of architecture and design. Few have known to date, however, that Donald Judd has also concerned himself closely with furniture design. This aspect of crossover between design and the visual arts has prompted a collaboration between two institutions that live under the roof of Pinakothek der Moderne, namely Neue Sammlung – The International Design Museum Munich – and the Sammlung Moderne Kunst (Collection of Modern Art).

The exhibition “Donald Judd – A good chair is a good chair”, which is being organized jointly with the IKON Gallery, Birmingham and Judd Foundation, Marfa/New York, presents a concentrated selection of the furniture Judd has designed. It also includes prototypes and early items that Judd built himself and were destined for his own use – and have to date – rarely been on show outside Judd’s home towns of New York and Marfa, Texas. 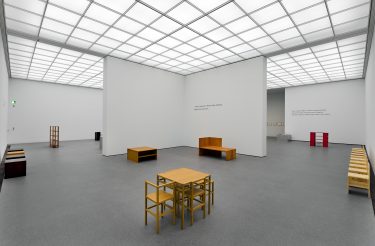