ARCHIVE. EXHIBITION. The white gold of the north. Art-Nouveau porcelain 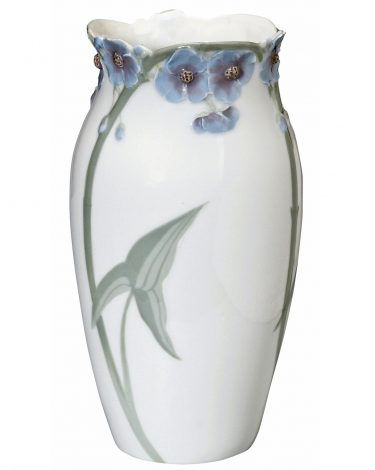 The third oldest porcelain manufactory in Europe (after Meissen and Augarten, Vienna) was in Sweden. It was founded in 1726 in Rörstrand Palace near Stockholm.  Around 175 years later, in the Art Nouveau period, the Swedish white gold attained world renown with its subtle underglaze painting and highly sophisticated freely formed, naturalistic relief and pierced decoration. The pieces were often based on designs by painter Alf Wallander (1862 – 1914, Stockholm): water nymphs and mermaids, medusas, crabs and other marine creatures, dragonflies, lizards, irises, tulips, a world of delicate blossoms and leaves, fluid or bizarre shapes. The first exhibition on this topic in Germany will be held at the Internationales Keramik-Museum in Weiden and encompasses outstanding Rörstrand specimens from around 1900, at the dawn of the Modern Age, between historicist stylistic pluralism and the influence of Far Eastern ceramics.

The exhibition will be accompanied by the book “Rörstrand. Jugendstil-Porzellan aus Schweden” (Rörstrand. Art-Nouveau porcelain from Sweden).

An exhibition by Die Neue Sammlung – The International Design Museum