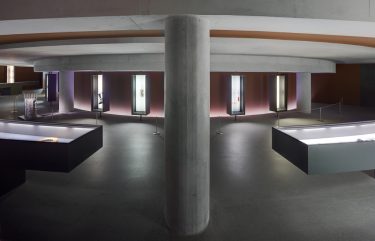 In Karl Fritsch a protagonist from the international jewelry scene realigned the Danner Rotunda as a curator.
Since 2004, Die Neue Sammlung has been showcasing contemporary international jewelry art in the Pinakothek der Moderne. This means that for the first time one of the most varied contemporary forms of artistic expression has found a permanent home in a museum of this kind, alongside art, architecture, graphic art and design.

The starting point for this is the Danner Rotunda, which illustrates the stylistic approaches of more than one-hundred jewelry artists from the world over, thanks to the Danner Foundation’s commitment and its jewelry collection which forms the core of this exhibition, and thanks to private donors, including Galerie Spektrum and Professor Peter Skubic, not to mention loans and donations from individual jewelry artists.
The 2004 opening exhibition was curated by Professor Hermann Jünger, who taught the jewelry class at the Munich Art Academy from 1972-1990, and Otto Künzli, who took over the chair in 1991.

They are succeeded by Karl Fritsch as a representative of a younger generation, who naturally brings his own ideas into play. Karl Fritsch has transferred his artistic concept, which involves reinvigorating, embedding, overlaying and reshaping already existing objects and revealing the actual process, to the task of reinterpreting the Danner Rotunda. In so doing he has changed the face of the permanent presentation in response to the contemporary jewelry scene with its many facets and different artistic attitudes.