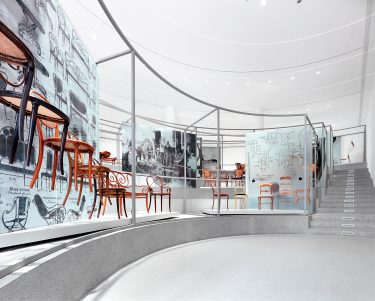 “Never before has anything been created more elegant or better in its conception, more precise in its execution, or more excellently functional.” This lavish praise by architect Le Corbusier was a reference to the bentwood chair No. 14 as the prototype of modern furniture.

Right beneath the large rotunda, at the center of the Pinakothek der Moderne lies a further special room devoted to the bentwood collection. Using Thonet by way of example (specifically the Ellenberg collection bought by Die Neue Sammlung), visitors are shown the roots of modernism, the beginnings of product design at the time of the Industrial Revolution. From the lower arena through to the upper circle the developments of this first “global player” unfold, and illustrate the eras of bentwood furniture since the mid-19th-century at the interface of experiment, mass production, and elitist special models. On the uppermost circle innovative experiments with bent plywood by international designers take us from the 1930s to the present day.

Michael Thonet (1796-1871) first invented chairs of bentwood. The master cabinet-maker from Boppard am Rhein, who from 1852 lived in Vienna, set lasting standards for design in the era of machines and industrial age.

While his competitors imitated historical designs using wood turning and wood carving machines, Thonet embarked on a totally different approach. He created a fundamentally modern design repertoire using the options enabled by the new technologies and production methods he had developed. Thonet realized a pioneering principle: design as the result of industrial production methods.

Thonet’s invention consisted of a method of bending solid beech rods into curved shapes using steam and pressure – a technique ideally suited to mass production. Moreover, the individual sections were no longer glued together, but had screw connections. This meant the chairs could be transported in their separate parts and assembled at their destination. For example, 36 dismantled No. 14 chairs would fit into a packing case with a volume of one cubic meter.

This farsighted commercial strategy and distribution policy made the Thonet company a unique phenomenon at the time. Comprehensive catalogs appeared almost every year, Thonet exported all over the world, the products could be found equally in mansions and on the sidewalks in New Orleans, or on the verandas of the rubber barons in Brazil. By World War I over 1,400 different models came to market – from dolls’ chairs through to a sophisticated pull-out table, from a tennis racket to a magnificent bed. Despite the wealth of models, many furniture items had standardized elements; typing and mass production permitted affordable prices. The concept was hugely successful – over 50 million of the famous No. 14 (“Konsumsessel”) chairs were sold by 1910.

In the late 1920s the emergence of tubular steel furniture briefly put an end to the supremacy of bentwood furniture, but shortly afterwards it experienced a new upturn in conjunction with plywood and laminated wood. Outstanding designers from Alvar Aalto and Marcel Breuer via Charles Eames and Sori Yanagi through to Grete Jalk devoted themselves to this topic, which repeatedly challenged designers to find completely new solutions, as shown in the bentwood chair by Gerald Summers, which is made from a single workpiece – experiments that extend through to the present day with the laser-cut designs by Beat Frank.