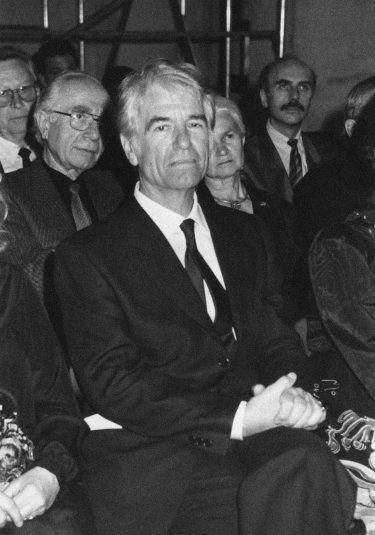 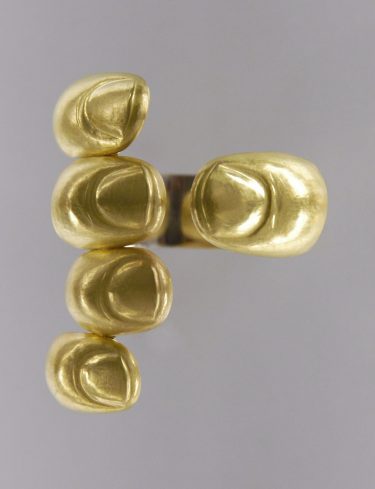 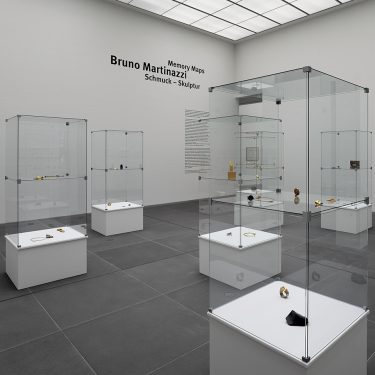 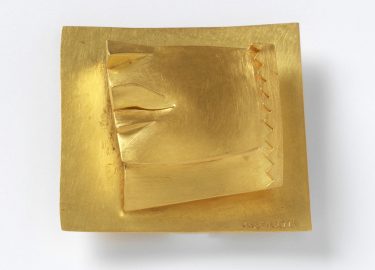 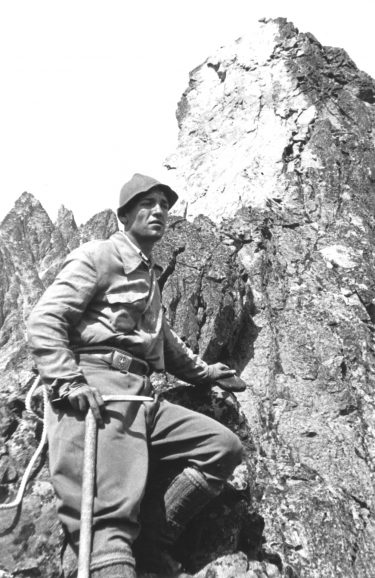 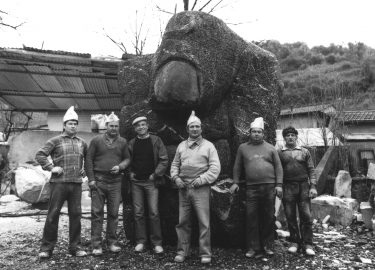 Bruno Martinazzi was born 1923 in Turin. One of the greatest names in studio jewelry died on July 14, 2018. Munich was an important station in his life as a jewelry artist.
The Italian grand seigneur was linked with the Bavarian metropolis by friendship with the goldsmith and academy professor Hermann Jünger (1928-2005) and by collaboration with Herbert Hofmann and his successor Peter Nickel. Both were responsible for the jewelry exhibition at the Internationale Handwerksmesse, which has taken place annually since 1959.
Martinazzi was honored with the Bavarian State Award in Munich in 1965, followed by conferral of the Golden Ring of Honor of the Society for Goldsmith’s Art in Hanau in 1987. Martinazzi, whose predominantly gold jewelry objects outstandingly embodied Italianità, accompanied the work of Die Neue Sammlung and the Danner Foundation with very great and friendly interest. One of the high points was a collaborative exhibitit in 2011 entitled Bruno Martinazzi. Memory Maps. Several years previously, Bruno Martinazzi had accepted Die Neue Sammlung’s invitation to give a lecture in the „All Abaout Me“ series at the Pinakothek der Moderne in 2005. In that talk, he described the path that led him to become a unique artist whose widely admired creations exerted an essential effect on the evolution of studio jewelry around the world.
From the vantage point of Die Neue Sammlung, and now that Bruno Martinazzi has reached the end of his way, it seems appropriate to reprint abridged excerpts from his lecture.
Petra Hölscher
(…)
In my childhood I tried to do the same things that my father had done so passionately. My mother told me that my father had loved mountains and photography. I played with the chemicals and his development equipment in what was rather an unprofessional dark room and watched as fairy-tale mountains appeared. (…) Mountain climbing became a passion. In 1947, after four years of absence due to the war, I returned to the mountains.
(…)
There is a time that destroys and a time that saves. I believe that time leaves us a gift but it is up to us to recognise this and to know how to protect our things: this gift is the ‘soul’. The things that are absent gather in the soul: all that we are forced to separate from, our wishes and everything that has no place in reality. I try to understand myself and others but, in order to do so, I need my hands and my body, just as in mountain climbing. I know that I cannot attain perfection and beauty but I can work in beauty, I can strive for beauty and make art. At the age of ten I took violin lessons. My teacher wanted me to devote myself in music. My family was against it and I studied chemistry right through to the diploma. When I was thirty years old, I finally began on art but it was too late for music.
(…)
‘Matter yearns for form just as the sick person longs for health’, thus spoke Master Eckhart, a famous German mystic. Stone and gold wait patiently: gold is imperishable and it is as if stone takes on a soul with time. ‘There are stones that warm like hearts and hearts that are as cold as stone’ (Talmud). The forms that await liberation are in the souls of poets and therefore, of all people. In a poem Giacomo Leopardi deals with some of the most weighty subjects: infinity, life, death. However, they are handled with a light touch and so graceful are his words that they make heavy things light and light things heavy. I try to give birth from beauty to the art to which I am committed. I mean the beauty of classical antiquity, which I have inherited from those who before me drew their knowledge from it. One must safeguard this knowledge from negligence and foolishness. Recent research has shown that a considerable part of the brain controls hand movements. Embossing a little piece of sheet-gold or sculpting stone are activities that are the exact opposite of each other, mirror-images of one another, or, if you prefer, games: the hammer enlarges the sheet of gold; the chisel reduces the size of a block of stone. Tools of varying sizes together with points and hammers of different weights and differing shape are used. There is, apparently, continuity but the games are indeed different. The sculptor works outdoors, in the natural environment, often together with other people. The goldsmith works alone in an enclosed space, concentrating on a small object which is built with the aid of fire. Sculpting is encounter/embrace; gold requires fingers that are both powerful and delicate. In sculpture form and strength are revealed by the time the work has almost been finished whereas in goldsmithing, the form immediately comes to light; it is, however, at the very beginning extremely fragile and must be nurtured and strengthened. The scuptor can, in a certain sense, be compared to a titan; the goldsmith is part alchemist and part shaman. The alchemist observes, investigates and tests matter; his means are water, fire, myths and philosophy. The shaman acquires his knowledge from indeterminate forms. Making art means learning and knowing. Making something and creating with body and soul helps one to unterstand reality. What we call art is ‘that ancient connection of soul, eye and hand.’

The article was first published in Art Aurea