Futuristic objects in the 1960s need not automatically be fashioned from plastic. This is proven by the 50 cm-high and thus quite tall ceramic sculpture group by Beate Kuhn dating from 1965. Its geometrical shapes such as cylinders, tubes and spheres are combined to form a daring composition. While the interlocking elements evoke a sense of instability, the use of ceramic simultaneously conveys an impression of constancy; a reference to the future visions of that decade? Particularly striking is the strong dynamism of the object, which can be read both in its structure and its upward thrust. After all, a contemporary of Kuhn, namely artist Jean Tinguely, remarked in 1959 in view of the latest developments in technology and space travel: “Everything is in motion. Standstill does not exist.” All the more remarkable that such dynamism is generated by a ceramic object. Its creator Beate Kuhn deliberately abandoned traditional everyday ceramics in favor of potting methods to produce free, artistic works. In doing so she has transferred the ideas of progress typical of the “Space Age” to her trade in a highly individual manner. In her work we repeatedly encounter figures and objects that arouse associations with far-away worlds. Is not the formal language of her group reminiscent of structures or plants from another planet? 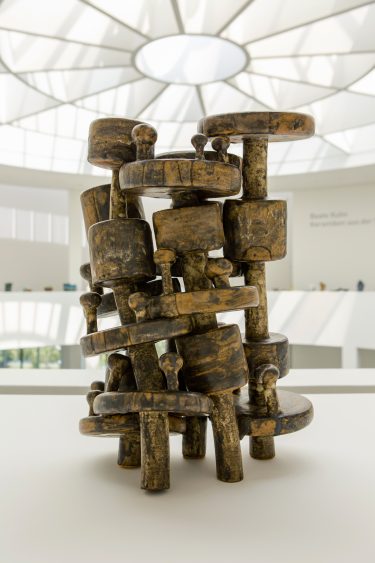