Jewelry design at Bauhaus is inextricably linked with the name Naum Slutzky. Born in Ukraine and trained as a goldsmith in Vienna, Slutzky joined the Bauhaus in Weimar 1919 thanks to his contact to Johannes Itten. Initially, he worked in the metal and goldsmithing workshops and in 1921 he was placed in charge of the goldsmithing workshop. One year later he passed his master goldsmith examination.
The pendant which was made between 1920 and 1922 is one of Slutzky’s most important works, as evidenced by numerous publications, which only had recourse to the photograph published by Bauhaus, as until recently the pendant was believed to have been lost. Slutzky had gifted it to fellow Bauhaus student Else Kleinwort, and this outstanding piece of jewelry remained in her family for almost 100 years, without experts being aware of it.
Manufactured from various ring sections and serrated circles, which form the outer border for a semi-precious stone, the disc-shaped pendant with small coil and cord was the first of a series of similar designs by Slutzky, mostly only documented as photographs. Simultaneously, the jewelry developed from a circular form clearly illustrates the influence of Johannes Itten’s morphology on the jewelry compositions of his former student.
Through his use of simple materials Naum Slutzky succeeded in breaking up the narrow canon of “precious” in jewelry materials, placing the focus firmly on the design itself. For the artist jewelry was not a symbol of prestige, status or social standing, rather the value could be measured solely by the artistic design.
The Bauhaus also regarded the pendant as exemplary for the jewelry produced there. Presented as early as 1923 in the first major Bauhaus exhibition in Weimar, the pendant together with a ring by Slutzky is amongst the only jewelry objects Walter Gropius, founder and first director of the Bauhaus included in the items he selected 1925 to illustrate typical Bauhaus artworks.
Pieces of jewelry like this pendant are excellent examples for the avant-garde design approaches at Bauhaus, which show that jewelry can be placed in a new context, and liberated from its traditional ties. With his round disc shaped pendant Naum Slutzky created one of the most striking models for the development of modern jewelry in the second half of the 20th century.

Provenance: From the estate of Else Hopf, née Kleinwort (1897-1985), who studied 1920 at the Bauhaus, under Gerhard Marcks amongst others, and was a close friend of Naum Slutzky. Naum Slutzky gifted her the pendant together with two other objects, which were considered lost until their rediscovery 2009 in the TV program Kunst & Krempel (Bayerischer Rundfunk, german only). 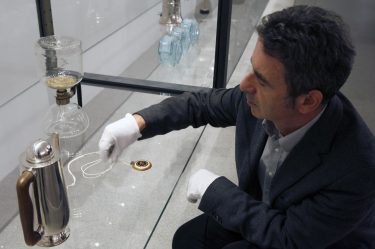 The Bauhaus-pendant is put into the showcase by Dr. Josef Strasser. Photo: Die Neue Sammlung – The Design Museum (A. Laurenzo) 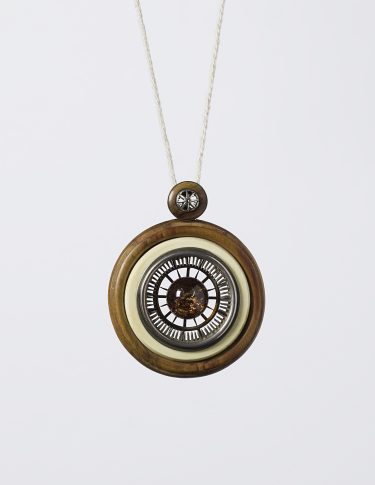