Shaped like a space capsule on stilts, Juicy Salif Citrus Squeezer by Philippe Starck stands on long, spindly legs. It has hardly anything in common with the normal notion of such an appliance. In place of the customary device complete with sieve and pulp separator Starck created a tapering cone body that sits atop slightly curving insect-like legs. Only the sharp-edged ribs that help to squeeze the juice from the fruit recall customary citrus squeezers.

Starck had the idea for the design while vacationing in Italy. A plate of calamari with lemon juice is said to have inspired the designer to produce this unusual shape resembling an octopus. He drew his initial sketch on a restaurant table mat and sent it Alberto Alessi, who was actually expecting to receive a tray design.

The 29cm-tall citrus squeezer of made of cast, polished aluminum looks more like a sculpture than a household appliance. Starck himself describes it as a “typical wedding gift” that you can be proud to present. Even though “Juicy Salif” has often been accused of not being very practical, in fact it is. All you need do is place a glass beneath the raised cone. The minimalist design has been frequently criticized for not includíng a sieve to catch the pips and pulp and, but Starck’s product is highly functional. It merely focuses on the actual action of squeezing, for which he came up with a new, surprising idea. This subversive approach to an everyday object is typical of the French designer, and “Juicy Salif” has long since been considered one of the design icons of the 1990s. 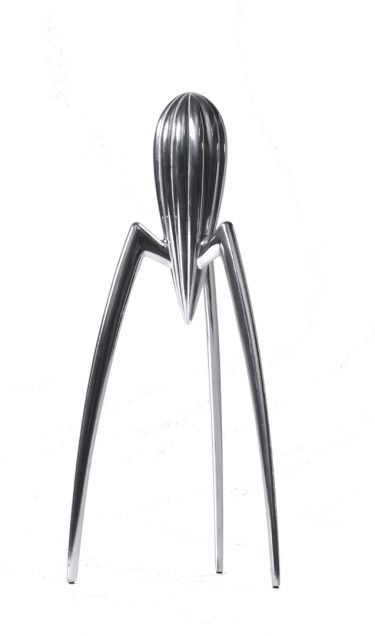