If tested in a wind tunnel, the table microphone would probably prove to have a very low flow resistance – you can see that.

Shaped like one of the 1930s Zeppelins, the microphone’s casing floats almost weightlessly on a rectangular base. The latter’s silhouette is in turn so curved that it brings to mind the body of a streamlined racing car.

Fast cars and elegant airships – they were perhaps the most popular ambassadors of the aesthetics of streamlining that from the end of the 1930s onwards not only prevailed in mobility design but in fact in the decades that followed emerged as the predominant aesthetic (including that of everyday objects) and thus became the epitome of a forward-looking, futuristic form of design which was also compatible with mass appealing design.

The table microphone is a relatively early and highly successful example of transposing the aesthetics of streamlining onto the design of objects for everyday use.
Even if air resistance does not of course play any role in this small Bakelite object, it is nevertheless shaped like an ideal streamlined body, and thus symbolizes a focus forwards into the future.

It was designed by Italian architect and designer Gio Ponti for Ducati. 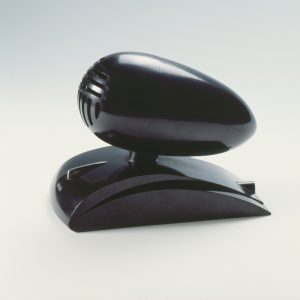