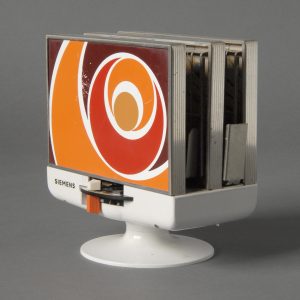 A toaster with a spaced out feeling!

Even traditional firms like Siemens drew on the visionary, sometimes psychedelic late 1960s, for example with their TT series.

What does it take?

How does it work?

First once everyone at the breakfast table, very much in keeping with the spirit of liberation of the day, had selected the degree of browning they desired for their bread (roll) using the slide control. Then an ingenious and today usually rather battered side tilting system offered the toast to the hungry breakfast guest as a standing rhomboid rack – which was incidentally very practical for removing the toasted items.