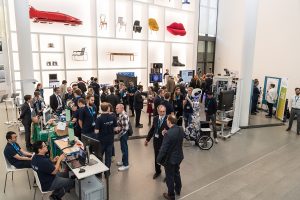 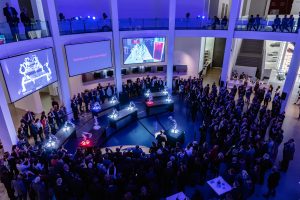 A high-speed connection made the robotic arms at Pinakothek der Moderne form a machine learning network with two other groups of robots in different locations. Photo: A. Heddergott / TUM 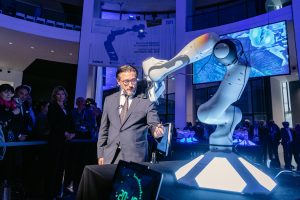 To celebrate the launch of its Munich School of Robotics and Machine Intelligence (MSRM), the Technical University of Munich (TUM) hosted a high-caliber robotics congress with international guests and a big opening ceremony at the Pinakothek der Moderne. Alongside the researchers and politicians in attendance, the spotlight at the event was also on the machines themselves.

On Friday October 26, to mark the opening of the MSRM in TUM’s big anniversary year, the Rotunda of the Pinakothek der Moderne in Munich was turned into a “robot lab”. The new integrative research center will bring together the outstanding expertise in robotics, machine intelligence and perception research from TUM’s various departments under one roof – not only from engineering and natural sciences fields, but also in political and social sciences with the TUM School of Governance and the Munich Center for Technology in Society (MCTS).

At the MSRM, they will cooperate in fundamental research and practical applications for robotics and machine intelligence, always with a focus on people’s needs and the impact of new technologies on society. More than 30 TUM professors will be involved in the MSRM, and further appointments will be made in the coming months to new research chairs in robotics, machine intelligence and machine learning.

International scientists in attendance at the Pinakothek der Moderne event

Many outstanding international robotics experts accepted the invitation to attend the colloquium in Munich marking the opening of the MSRM. Among the prominent scientists sharing their visions of the future and latest research were Prof. Oussama Khatib, often described as the father of modern robotics, and Prof. Masayuki Inaba, one of Japan’s top experts in the field. Several exhibits presented the results of robotics and AI projects at TUM.

Representatives of the Bavarian cabinet included Dr. Marion Kiechle, the science minister, and Georg Eisenreich, the minister of digitalization, as well as the Bavarian minister for economic affairs, Franz Josef Pschierer, who said: “Research institutions like the MSRM help to maintain Bavaria’s status as a location for top-flight innovation and research and its economic strength. Robotics and machine intelligence are important fields for the future where we have to demonstrate our competitiveness. Consequently, the Bavarian state government has made them a focal point of its research and development policies and funding. At all times, the focus is on beneficial effects on the working world and people’s everyday lives.”

Dr. Marion Kiechle, the minister of science, said, “With the Munich School of Robotics and Machine Intelligence, we have reached a new milestone at the Technical University of Munich and are establishing a solid platform for our new AI competency network.” Commenting on the MSRM concept, TUM president Prof. Wolfgang A. Herrmann said: “The institute ideally embodies the TUM philosophy: Interdisciplinary cooperation at the interface of the various scientific cultures, from engineering to philosophy.”

The highlight of the evening was the world première of an intercity demonstration linking robotics and networked machine learning. In a “robot classroom” in the foyer of the Pinakothek, 12 robotic arms tackled the task of learning how to use keys to open locks. The result: entirely new learning algorithms and networking via a super-fast mobile telephone link provided by Vodafone. The distributed robots became a team, with the ability to share their individual learning experiences instantly. And not only in the Pinakothek: Other “classrooms” in the MSRM building and the Vodafone 5G Lab in Düsseldorf were linked to the robots in the Pinakothek via mobile phone and video screens. Together they solved the problem for more than 30 locks within just a few minutes.

Explaining the experiment, MSRM director Sami Haddadin says: “It’s not about humanizing robots. The goal is for robots to become intelligent tools for people. Through collective artificial intelligence they can quickly adapt to new tasks – whether that’s in the factories of the future or as service robots in the household.” Haddadin, a winner of the German President’s Award for Innovation in Science and Technology, who – along with Wolfgang Ecker, an honorary professor at TUM – is a member of the Bundestag Study Commission on Artificial Intelligence, sees many potential application areas for intelligent machines. At the MSRM, for example, the Lighthouse Project on Geriatronics will study how robots can help older people to continue living in their own homes for as long as possible.