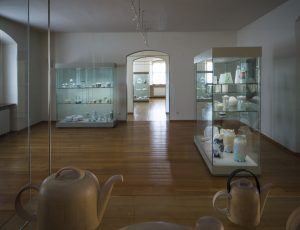 Following compulsory expropriation during the Third Reich and restitution the company Rosenthal was one of the most important protagonists of industrial design after World War II. In the young Federal Republic, the name Rosenthal stands for democratic, future-oriented design. It was the credo of Philip Rosenthal (1916-2001) that the designs be “originals of their time”. He was the driving force in art and design-oriented product design, and commissioned key figures of the art and design scene with the design of porcelain, glass, ceramic and metal, so that soon the international avant-garde could be encountered at the production facility in Selb, Upper Franconia. Artists such as Friedensreich Hundertwasser, Salvador Dalí or Victor Vasarely designed patterns and art objects, designer like Rudolf Lunghard, Raymond Loewy, Wilhelm Wagenfeld, Hans-Theo Baumann, Sigvard Bernadotte, Tapio Wirkkala, Timo Sarpaneva, Bjørn Wiinblad, Hans (Nick) Roericht or Walter Gropius designed services and porcelain items. New, historically untainted designs were created that would characterise German product design.
But before all the tea/coffee pots, jugs, cups, plates and vases come onto the market they not only have to be designed, but also developed in numerous individual stages – a complex process to which the public is normally not privy, but which necessitates close cooperation between Rosenthal Design Studio and the designers and artists. Then the right proportions are explored, functions optimized, and the best mold selected from numerous options. Plaster, wood or foam molds, glass and metal elements, and the latest models produced using rapid prototyping demonstrate the material developments, but also the development of sculptural form finding in industrial design. This diversity of design models offers a unique glimpse behind the scenes of a company in dialogue with the protagonists of international design, including the Finns Tapio Wirkkala and Timo Sarpaneva, former Bauhaus Director Walter Gropius, American Richard S. Latham, Italians Marcello Morandini and Aldo Rossi, or Hartmut Esslinger, the first Apple designer, and later Munich designers Konstantin Grcic and Stefan Diez or the Spaniard Patricia Urquiola – key figures of German and international design history from the post-war era to the present day.